If you haven’t read the first three chapters of my Little River serial, you can catch up here. 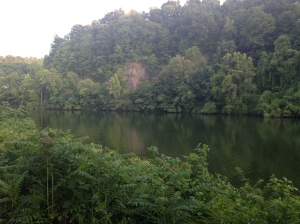 Sweat dripped down Abigail’s back, as she flipped the burgers on the grill. She had left for home as soon as church was over that morning, while her husband, Jonathan, stayed behind. She was attempting to get lunch on the table without heating up the kitchen in the old parsonage.

“Mama?” Nine year old Olivia was sticking her head out the back door.

“What is it, Sweetheart?” Abigail was distracted. Her thoughts were wrapped up in the short exchange between herself and Tammy Hall after church.

“Daddy texted you.” Olivia was offering Abigail her cell phone.

“Thank you.” Abigail took the phone as her daughter went back inside.

She read from the screen, On my way. Jordan Hall cornered me.

Abigail rolled her eyes. Jordan was Tammy’s son, and Abigail had always found him annoying.

Carrying the platter of burgers inside, she found the table had been set for lunch and glasses filled with tea while she had been outside. Her eleven year old daughter, Emma, was smiling from her perch on the kitchen counter.

“Thank you for setting the table without being asked.” Abigail set the burgers on the table, and gave her daughter a quick hug. Narrowing her eyes, she asked, “What do you want?”

“Can’t I just do something nice for my mother?” Emma cocked her blond head to the side, and smiled sweetly. Abigail couldn’t help but notice how much her daughter had changed in the past year. An early bloomer, Emma was already starting to act…and,to a lesser extent, look…like a teenager.

Emma grinned. “Okay. I want to go to Carly’s house after lunch.” She paused and then added, “But I did want to be helpful, too.”

“Uh, huh.” Abigail nodded. “I knew you had ulterior motives. Is it okay with Carly’s parents?”

Emma nodded. “She asked them after church.”

“Okay. You can go. But only if your room is clean.”

As Emma left to check her room, Abigail heard the crunch of tires on gravel, and knew her husband and the boys were home.

The front door flew open, and Jacob came running in. Jacob was seven, and ran nearly everywhere. “No running in the house!” Abigail admonished him.

Jacob was quickly followed by Luke, her thirteen year old, and Jonathan. Her husband planted a kiss on her cheek, and said, “I could smell the burgers as soon as I got out of the car. I’m starving!”

“It’s on the table.” Abigail turned to Jacob and said, “Go tell your sisters that lunch is ready.”

Abigail followed Jonathan to their bedroom and sat on the bed as he began changing out of his suit. She tried not to be irritated with him when he slung his suit over the back of his desk chair instead of hanging them up in the closet. “So what was the deal with Jordan?”

“He was asking about Titus.”

Abigail arched her eyebrow, “What about him?”

Jonathan sighed and scratched the back of his head. “At first he was just telling me that he met him. He was out knocking on doors inviting people to Revival. He was saying he didn’t know I had a brother. Wanted to know why he didn’t come to our church.”

“Nosy.” Abigail didn’t try to hide her distaste for Jordan.

“He’s just curious, Abby.” Jonathan always saw the good in people, a trait Abigail admired in her husband, but felt no real need to cultivate in herself.

“Why is he so curious?” Abby asked, as Jonathan pulled a t-shirt over his head. “What did Titus say to him?”

Jonathan shrugged. “Jordan just said he turned him down. I didn’t press for details.”

“Tammy stopped me in the parking lot.”

“Yeah.” Abigail rolled her eyes again at the thought of Jordan’s busybody mother. “She said she just wanted to let me know that she hadn’t stopped praying for our ‘lost family members to come to know the Lord’. I was wondering what was up with that. I just told her ‘thanks’, and got out of there as quick as I could.”

“When’s the last time you talked to your brother?”

“You really ought to try a little harder to see him or at least talk to him.”

Jonathan raked his hand through his short brown hair, and sat down beside his wife. “I mean to. I miss him. I just have so much on my plate with the church and you and the kids.”

“Ever since we moved back to Little River, things have been so strained between you two.” Abigail leaned her head onto her husband’s shoulder.

“Seminary did change you.”

“I have a lot of responsibilities.”

“I know that.” Abigail stroked his arm.

“Okay.” Abigail decided not to argue the point. “I still think you need to make more of an effort. The church is important, but so is family. While we were in Louisville for seminary, Titus bore the full brunt of everything that happened when Sam died. He’s more than stepped up for Annie and the boys. You two both had a lot of changes during that time, but you’re brothers. You two used to be so close.”

“I know.” Jonathan patted his wife’s leg and stood up. “Let’s go eat lunch. The kids are going to revolt.”

After twelve years of marriage, Abigail knew when her husband was finished with a conversation. She followed him to the kitchen, and, seeing how his shoulders drooped, she kind of wished she hadn’t goaded him about his brother.

As they sat down to eat, Olivia said, “Mama, your phone dinged again.”

Abigail got back up and retrieved her phone. She didn’t see any messages. “Are you sure it wasn’t Daddy’s phone?” she asked. “I don’t have a text.”

“Mine is on the table by the chair in the living room.” Jonathan said, as he helped Jacob assemble a cheeseburger.

Abigail found Jonathan’s phone, and was surprised to see a message from Titus on the screen. We need to talk.