If you’ve not read the previous chapters of my Little River serial, you can catch up here. 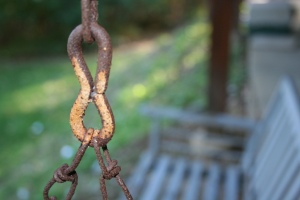 “Yes?” Abigail answered her daughter without looking away from the pan of brownies she was pulling from the oven.

“Why?” Abigail turned to look at her daughter now.

Olivia was excitedly shifting her weight from one foot to the other. “I don’t know, but she’s crying in the bathroom.”

Abigail turned off the oven and slid the oven mitt off her hand. Before she made it through the kitchen doorway, her teenage son came in the back door calling, “Mom?”

Luke was tall, thin, and looked just like his father with his short brown hair and brown eyes. He looked agitated.

“Is he?” Luke was studying his mother’s face.

“Who told you that?”

“Caleb.” Luke answered. “He rode his bike over to hang out, because he said Uncle Titus was depressed because his boyfriend broke up with him.”

“Jamie broke up with Titus?” Abigail was shocked.

“Why didn’t anyone ever tell me?”

“Why not?” Luke crossed his arms over his Atlanta Braves shirt. “I’m not a little kid.”

“I know that, Sweetheart.” Abigail was unsure how to handle the situation. She was irritated that it even was a situation. Jonathan was always trying to shelter the kids, and it always seemed to backfire lately.

“Luke!” Abigail was furious. “Don’t let me ever hear you use that word again.”

“He may say it’s a sin, but he doesn’t call people…that hateful word.”

“It’s not just a word. It’s hateful, and it’s hurtful. I don’t want to hear it come out of your mouth again.”

Intentionally softening her voice, Abigail said, “I’m sure it’s kind of confusing to you. Do you have any questions?”

“No.” Luke turned quickly and walked off. Abigail couldn’t tell if he was upset about the news or just angry no one told him.

Following Luke outside, Abigail found Caleb sitting on the bottom step with Jacob. “Go play, Jakey,” she said, “I want to talk to Caleb.”

Jacob looked disappointed to be told to leave, but he was a habitually obedient child.

Abigail waited until her youngest was out of earshot, and then asked, “Titus and Jamie broke up?”

“I imagine so,” Abigail said sadly. “They’ve been together for a very long time.”

“I didn’t know Luke didn’t know he was gay.” Caleb looked bewildered. “I thought everyone knew.”

“Jonathan didn’t want to tell them.”

“He thought it would be too confusing for them.”

“What’s confusing about it?” Caleb asked.

Abigail sighed. “You know what your Uncle Jonathan thinks about homosexuality.”

Abigail shrugged. “I don’t know about all that, but I do know I care a lot about Titus. We all do. Is he okay?”

Caleb shrugged. “He cries at night. I can hear him through the wall.”

Abigail felt her heart contract with a sharp pain. “Bless his heart.”

“I don’t know what to do, so I’m just trying to give him some space.” Caleb was rolling a small pebble between his thumb and finger.

Abigail put her arm around her nephew. “You’re having a hard go of it lately, aren’t you, Sweetheart.”

“How’s your mom? Have you heard anything?”

“Not really.” Caleb tossed the pebble away. “Uncle Titus said she’s going to stay in the hospital for a while, and then she’ll probably go stay with Gran and Gramps for a while.”

“I’m sorry, Caleb.” Abigail gave his shoulders a squeeze. “I really am. I know this has to be so hard for you. Are you doing okay with Titus?”

“How’s everything else? How are your brothers.”

“Fine.” Caleb reached for another pebble from the planter by his foot.

Caleb’s neck flushed pink, but he shook his head.

Abigail hadn’t missed the blush, and prodded the boy in the ribs with her finger, “What are you not telling me?”

“Come on! You can tell your Auntie Abigail.”

“Now the truth comes out!” Abigail laughed. “Who is she? Is she pretty?”

“Her name’s Megan. I mow for her papaw.”

Caleb shrugged. “I just met her once. We were going to go swimming with Robbie, but he got sick. So, we’re going to go do something Saturday.”

“Not a date,” Caleb protested. “We’re just hanging out. She doesn’t know anyone.”

“Just staying with her papaw for the summer.”

“I see.” Abigail paused, and then exclaimed, “Hey! You didn’t  answer my question. Is she pretty?”

They sat on the steps for a few minutes, watching Jacob try to climb a tree. Caleb interrupted the silence by saying, “I think Jamie broke up with Uncle Titus because of me.”

“What do you mean?” Abigail asked.

“I think it’s because Uncle Titus let us move in with him.” Caleb tossed the second pebble away. “He spends too much time taking care of Mama and us boys, and not enough time with Jamie.”

Abigail didn’t doubt that was the reason for the breakup. She knew Jamie had been trying to get Titus to move in with him for years. To her nephew, she said, “It’s not your fault, Caleb.”

“I know. But if it weren’t for taking care of us, Uncle Titus would have moved to Knoxville years ago. They’d probably be married or something by now.”

“Maybe so,” Abigail assented, “But that’s Titus’ choice to make.”

“He didn’t have much of a choice,” Caleb countered. “There wasn’t anyone else to take care of us.”

The words stung Abigail. It was true she and Jonathan had been in Louisville when Sam died, but they had been back in Little River for years now. She knew they could have relieved some of Titus’ burden.

“I’m going to go find Luke,” Caleb said as he stood up. “We’re going fishing, if that’s okay. Down at the pond.”

Caleb laughed. “It’s just the pond. We can swim.”

“Even so.” Abigail dusted off the seat of her pants, and watched Caleb disappear around the corner of the house, Jacob close behind him. She sat down on the porch swing, and pushed herself back and forth with the toe of her tennis shoe, making the rusty chain squeak. She felt extremely guilty. She never pushed Jonathan when it came to his brother, but she should have pushed him to help him take care of their sister and her boys.

Abigail was so absorbed in worrying about her brother-in-law she had completely forgotten to see about her crying daughter.