If you’ve not read the previous chapters of Little River,  you can catch up here! 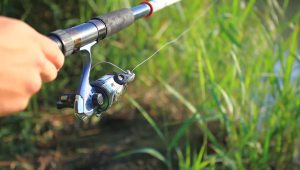 The late August sunshine reflected off the river, making Caleb squint. He had forgotten his sunglasses at home when Robbie and his dad, Jim, picked him up that morning. He hadn’t been fishing with them in a long time. Jim had been working a lot of overtime and hadn’t had time.

“How are you liking staying with your uncle?” Jim asked Caleb as he cast his line into the water.

Jim nodded, but didn’t say anything. He was a man of few words.

After a few minutes of fishing in silence, Caleb said, “We may be moving to Knoxville.”

“What?” Robbie jerked his head up to look at his friend. “You didn’t tell me that!”

“It’s not for sure yet.” Caleb didn’t look up from his line in the water. “Uncle Titus is putting his house up for sale, though. If he can sell it, we’re going to move.”

“Hmm.” Jim spit a stream of tobacco juice onto the grass by his feet, but didn’t say anything else.

“That sucks,” Robbie said, flinging his pole on the ground.

“Yeah,” Caleb agreed. He wasn’t going to tell his friend he actually wanted to move. Robbie was one of the biggest reasons leaving would be hard for Caleb. They had grown up together, and Caleb had never had another friend he was anywhere near as close to as he was with Robbie.

“When were you going to tell me?” Robbie demanded.

“Did you tell Megan?”

Caleb felt his heart speed up. He hated when people got mad at him, and he could tell Robbie’s anger was growing. “Yeah.”

“Typical.” Robbie glared at his friend. “I’ve got to take a leak.”

Caleb watched his friend stomp off toward the woods, and sighed.

Jim reached over and clapped a big, rough hand on Caleb’s shoulder. “We’ll miss having you around, though. You’ve been just like a son to me.”

Caleb looked away, not wanting Jim to see the tears welling in his eyes. He had wished so many times that he really was Jim’s son.

Robbie stalked back to his spot beside his friend and picked up his fishing pole. “I guess it’s not that far away.”

“Uncle Titus says you can come over whenever you want,” Caleb offered. “And he says he will drive me back to Little River sometimes to hang out.”

“You can spend the night at our house,” Robbie said.

Jim nodded in agreement. “You know you’re always welcome. Whenever you want.”

“Thanks.” Caleb felt a tug on his line, and gave it a jerk. He started reeling, feeling the pull of a fish on the other end.

“Looks like a big’un!” Jim reached for the net leaning against his camp chair, and stepped down to the water’s edge to dip it out.

Caleb’s cheeks hurt from grinning as he pulled the hook from the bass’ mouth. The fish gleamed in the sunlight. “I think it’s the biggest fish I’ve ever caught!”

Caleb had a funny feeling he wasn’t talking about the fish, and he had to turn away again. “The sun’s hurting my eyes. I should have brought my sunglasses.”

Caleb walked slowly down the street. His stomach hurt. He had eaten too much. Robbie’s mom was such a good cook. She cooked like Caleb’s grandma–cornbread, pinto beans, fried potatoes, and fried fish.

Caleb turned his head at the sound of his name, scanning the street and the park across the way. He couldn’t find the source.

Caleb’s eyes finally landed on Megan, sitting on the landing of the first of two wooden towers on the play structure in the park. She waved at him.

Caleb’s heart sped up as he smiled and jogged over to the park. “What are you doing?”

“Just hanging out.” Megan was smiling down at him, looking radiant in the fading sunlight. “I’m bored out of my mind. Papaw’s having an old man convention at his house.”

“All his old geezer friends are playing cards and stinking up the house with their nasty food.”

The two towers of the play structure were joined by a swinging bridge. The first tower had a ladder to climb up; the second tower had a slide to get down. Caleb crossed the bridge and joined his friend. “You look pretty,” he said softly, and looked away, afraid eye contact would make him blush.

“Thanks.” Megan scooted closer to him, her hip pressed against his.

“How long have you been up here?”

“A while.” Megan held up a book from beside her, and said, “I brought this old book I found in my bedroom closet. I think it used to be my mom’s. “

“Not really.” Megan laughed. “I need to get a library card or something.” Changing the subject, she asked, “What have you been up to?”

“Fishing with Robbie and his dad.”

“Cool. Did you catch anything?”

“Did you take a picture?”

Caleb shook his head. “No camera. But it sure tasted good!”

Megan laughed. “I’ve not been fishing since I was a little girl.”

“We should go sometime.” Caleb glanced over at her from beneath the brim of his ball cap.

Megan nodded, and then asked, “Did you tell Robbie about moving?”

“I figured as much.”

“He was really mad at first. And,” Caleb took his cap off and ran his fingers through his hair, “he was mad at me for telling you before I told him.”

Caleb shrugged. “It’s not your fault. He’s just used to being the only person I tell anything to.”

Megan reached for Caleb’s hand, and turned it over, holding it in her lap. “I’m glad you tell me stuff.”

He wished he had known she was going to hold his hand, so he could have wiped it on his jeans. He was afraid it felt sweaty.

“I don’t know what I’m going to do if you move before I go back home.” She leaned her head on his shoulder. “Meeting you was the only good thing about getting stuck in Little River this summer.”

The scent of her shampoo rose off her hair, and Caleb took a deep breath.  “I’m really glad I met you, too.”

Megan lifted her head from his shoulder, and turned to look at him. She smiled, expectant.

Caleb had seen enough movies to know this was his moment, but he had never kissed a girl before. He swallowed, glanced away, and wet his lips with the tip of his tongue. When he looked back at her, she was still watching him.

As he was gathering his courage, she laughed and said, “You are completely adorable, Caleb Salt.”

For the rest of his life, when Caleb thought about his first kiss, he always remembered that laugh and the taste of her strawberry lip gloss.