Posted on September 22, 2015 by Rachel Holbrook

If you haven’t read previous chapters of “Little River”, you can catch up here! 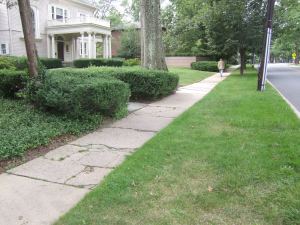 Jonathan hurried down the front porch steps, and walked down to the crumbling sidewalk. He had told Abby he was going for a walk, but he felt like running. He wanted to run until his lungs burst–until he couldn’t run anymore. He wanted to run until Little River was a distant memory. Instead, he walked. Steady, measured steps took him away from the parsonage and past the church.

When he was out of sight of his house, he slowed his pace and pulled his phone from his pocket. He dialed his brother’s number, took a deep breath, and waited for him to answer.

“Hello?” Titus’ voice was husky, as if he had been asleep.

“I was going to call you. I guess I fell asleep. What time is it?”

“Wow.” Titus cleared his throat. “It feels like I just got home from work.”

“Did you do it?” Jonathan interrupted.

“Do what?” Titus sounded confused.

“Nathan Bates was attacked last night.” Jonathan’s voice was strained. “You said you would figure it out. Did you do it?”

“Did I attack Nathan Bates?” Titus’ voice went up an octave. “Are you kidding me, Jonathan? Seriously? You think I beat up Nathan Bates?”

“I don’t know.” Jonathan closed his eyes and lifted his face to the fading sun. “Not personally. Did you make it happen?”

Titus snorted. “Really, Jonathan. I’m an engineer; not a mobster. You think I can just have people beat up?”

“Damn it, Titus.” Jonathan never cursed. The vein in his temple bulged, pulsing with the pain in his head. “I don’t know. I don’t know what to think.”

“I’m sorry.” Jonathan apologized. “I feel like I’m losing it. I just thought when you said you would figure something out, maybe you… I don’t know, Man. I’m losing it. I was just afraid someone in the family was going to get in trouble.”

“Someone in the family?” Titus prodded. “You thought maybe someone besides me did it?”

“You didn’t tell Clay or Josh did you?”

“No.” Titus’ voice was no longer sleepy, but clear and strong. “I didn’t tell anyone. I promise. I’ve just been thinking about it–trying to figure out what to do. I was going to tell you to call the police. I couldn’t think of anything else that made any sense.”

“Well, he’s leaving Little River now.” Jonathan had stopped walking, but slowly headed down the sidewalk again as he talked. “Kevin said he’s going back to Chicago when he gets out of the hospital. Whoever attacked him meant business. He’s in pretty bad shape, from what Kevin said.”

“I suppose you don’t believe in Karma, huh?”

“Of course not.” After a momentary pause, Jonathan added, “But I do believe in the intervening hand of God.”

“You think God beat him up?”

“Not personally.” Jonathan couldn’t help but smile a little, despite how upset he was. “The Bible does say in Matthew that it would be better for a man to have a millstone around his neck and be cast into the sea than to offend one of the little ones.” Jonathan paused before saying, “So, maybe He just allowed it to happen.”

“Well, however it happened, he got what was coming to him.”

When Jonathan made it back to his house, he groaned to see his brother-in-law’s beat up Ford pickup in the driveway. He was not in the mood for Abigail’s redneck brothers.

As he approached his front door, he could see through the living room window. Josiah was in the floor wrestling with Luke and Jacob. Jonathan felt a pang of jealousy. He couldn’t remember the last time he got down in the floor and played with his boys. He was always so busy.

“Daddy!” Olivia squealed as he entered the room.

“Hey, Sweetheart.” Jonathan rubbed his hand over the back of his daughter’s blonde head.

“Uncle Josiah is here!” Jacob called from underneath his uncle.

“I can see that.” Jonathan replied. “How’s it going, Josiah?”

“Cain’t complain.” Josiah’s voice was garbled. He shoved the boys off him, and reached for his ever present Mountain Dew bottle and spit an amber stream into it.

Jonathan felt the bile rise in his throat. Abigail’s brothers disgusted him. He had never been able to figure out how a woman as sweet and gentle as his wife came from such a rough family. She just didn’t fit in with their tough, crass ways.

“Where’s Carter?” Jonathan asked. “I don’t think I ever see one of you without the other.”

“He’s got him a date tonight.” Josiah drawled. He often exaggerated his country accent when his brother-in-law was around.

“Aw, I don’t know.” Josiah shrugged. “Some gal from over the river.”

Abigail rolled her eyes at her brother. “Gal?” she asked. “Since when do you say gal?”

Jonathan walked through the living room to the kitchen, and poured himself a glass of tea. “Can I get you something, Josiah? Tea?” he called.

Jonathan stepped back into the room, his tea in one hand, and extended his right hand to shake his brother-in-law’s.

It wasn’t until Josiah reached to shake his hand that Jonathan noticed the barely scabbed over wounds on Josiah’s knuckles. He looked quickly at Abby, but she didn’t show any signs of noticing what her husband was seeing. Jonathan’s mind raced. Had Abby told her brothers what happened?

“What happened there?” Jonathan nodded his head at Josiah’s hand that was firmly…almost painfully…gripping his own.

Josiah looked him in the eyes and grinned that easy grin again. “Aw, nothing.” His voice was dismissive, but he maintained an intense eye contact with Jonathan. “Just a bar fight got a little out of hand. You know how people are. Sometimes you just gotta take care of business.”